It has been awhile since we posted about shooting through a camera lens at this or that or someone. We thought this time it might enlighten you to learn that we take some time away from the rigors of the gig to see images as we were meant to…through our eyes. 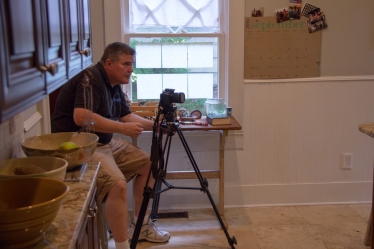 Our sight is a valuable element as we navigate through life. Although the blind cannot “see” they too must understand spacial references  by navigating through their environment. In many ways their abilities to do such are far more refined than those possessing sight. The hearing and scent senses of the blind too are sharper than ours would be.

Without straying too far off topic, my initial point was to discuss that aspect of photography which involves seeing a scene first with my eyes and then looking through the lens to, it is hoped, capture what I see. In the digital age you might say, “Oh that’s simple.” No, not as simple as you think. One must consider several things before the shutter should be pressed.

As in this shot of a large hardwood taken at golden hour, I had the intention of making sure the scene was not a silhouette. Why? Well, that answer has several ways to go. First, I saw the bark on the tree and the lichen pattern and wanted that to be part of the image. The shadow of the tree too I wanted to emulate a reflection as it might in a still body of water. 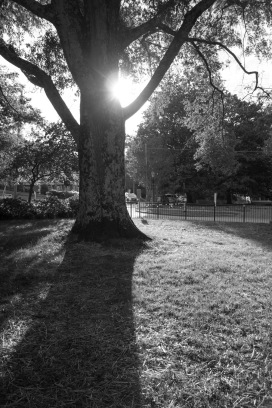 Second, I wanted the sun to just peek from the side of the tree so I positioned myself where the lens could do that. Although it is a high contrast black and white image, there is enough reflected light to make this scene look as I saw it.

Shooting in black and white, I believe, allows us to really study the values, mid-tones, contrast and composition of a scene in a way which color only can to the trained photographer. Color adds a big distracting dimension which can work to our advantage in some cases.

Taking an image such as this one with the water in the foreground and the home situated in the upper left frame, it becomes apparent that the eye travels there first, then to the grouping of azaleas in the center of the frame. It is clear that the dominant color here is green and the “distraction” of the azaleas with their pink hues creates a little bit of competition for the eye. As a whole this scene looked almost identical to what I witnessed. The strong late afternoon light coming from behind the camera evenly illuminated the scene which the water so wonderfully made a bit darker in that reflection.

One more example, this time of an indoor scene I did for a local real estate developer, demonstrates the idea that not all interior shots have to follow a formula. Here is what I saw in this room. a beautifully illuminated scene with various elements within it coming to life.

The idea was to capture the room with the morning light streaming in but NOT actually see the light source. The light and airy feeling I wanted to preserve so I placed the camera in the hallway with the sun not actually in frame, as I had done with the above example of the tree.

My goal was to warm it up a bit in post but I decided that it was not necessary with that great shadow on the floor created from the legs of the desk. Those shadow lines assist in making the room appear larger than it is too. In a room as this, it would seem that being able to look out the window/French door to the front porch would offer a refreshing break from work at this desk.

Really seeing an image in your mind before you step behind the camera is something most would-be photographers seem to overlook. They don’t truly consider lighting angles, shadow patterns, composition, background patterns and colors. There are so many elements to a good image but it is those GREAT images we strive to capture!